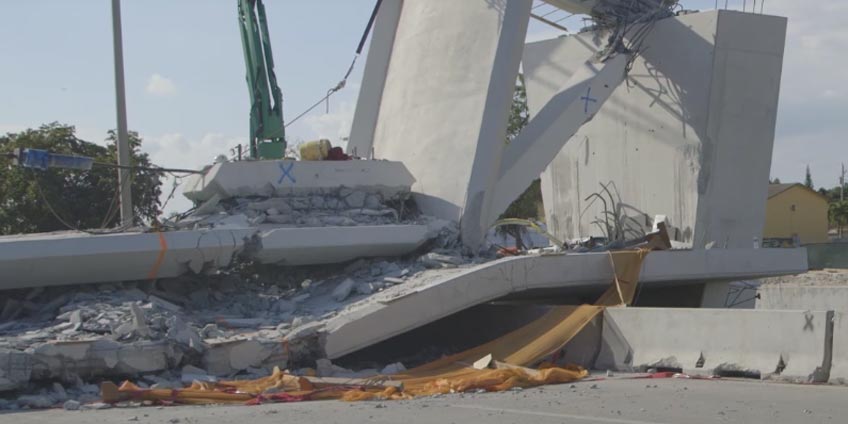 Why the state doesn’t release records on FIU bridge collapse

It’s been a while since the FIU bridge collapse, but its ghosts are still haunting South Florida. Who is truly responsible for this disaster? Why is the Florida Department of Transportation (FDOT) trying to block the release of the records that prove the reasons for its collapse? So far we only know of two people injured in the calamity filing a personal injury lawsuit against the multiple parties involved in the construction of the bridge. The parents of one of the victims, 18-year-old FIU freshman Alexa Duran, filed a wrongful death lawsuit. But the cause of the collapse is still under investigation.

Who is truly responsible?

The FIU Bridge collapsed back in March. Lead engineers noticed cracks before its completion, and they were also reported, but nothing was done to correct the problem. Additionally, on the morning of the collapse, there was a meeting to discuss progress on the bridge, and whether the cracks threatened the structural integrity of the bridge or presented a safety risk. Unfortunately, the records from that meeting were not released by the FDOT. FDOT says these records are public documents yet refuses to release them. Florida law is clear about the release of such documents. These documents are public record, and they should be released, especially since the bridge was paid for with public funds. So the public is entitled to know what happened and what went wrong.

The FDOT, however, had released a voicemail left by a FIGG engineer where he mentions the bridge had experienced cracking. The voicemail wasn’t received until Friday when the employee returned to the office after being busy on a project for three days. Unfortunately, the FIGG Engineering Group dismissed the importance of the problem. It was their responsibility to identify life-safety issues an address them. Nevertheless, FDOT project manager, Alfonso Reyna, also knew about the existence of such cracks, which were discussed during their morning meeting on the day of the collapse. But nothing was done. No road closures or any other assistance were provided.

The blame has been directed at FIU as well, even after documents of meetings from FIU clearly show the FDOT’s significant involvement on the project. The FDOT was responsible for approving the design-build team; they attended regular meetings with the design-build team and FIU staff and provided input on the location of the bridge, among other things. They argued that FIU never asked to close Tamiami Trail during construction. But transportation experts say the FDOT didn’t have to wait for FIU to ask them to close the road under the bridge. That’s something they can figure out on their own.

If you have been injured or lost a loved one in an accident, the dedicated personal injury attorneys at Gallardo Law Firm have extensive experience representing victims of fatalities across South Florida.